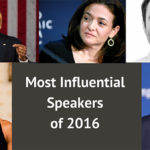 It’s that time of year….

And we’re hopping on the bandwagon too as we countdown the Top 5 Most Influential Public Speakers of 2016.

It truly was a great year for public speaking, an election year and a very heated Presidential race certainly helped.

But politics aside, there were also hundreds of fantastic Commencement Speeches, TED Talks and Public Addresses to choose from.

So here it is the TOP 5 Influential Public Speakers of 2016!

I had already mentioned it was a heated Presidential race…

And Donald Trump’s Speech at a Charlotte, North Carolina rally back in August is seen by many as a turning point in his campaign, many pundits have gone so far as to call it his best speech of the campaign.

He often bounces around from idea to idea and often detours into controversial territory that distract from his main message.

But on this August night in Charlotte…

…he stayed focused and on message with a broadly appealing, animated speech that puts him in our top 5 Influential Public Speakers of 2016.

It was also one of the first times Trump included dashes of humility and empathy…two of the most important things needed to connect with ANY AUDIENCE.

4. Tim Urban TED Talk – Inside the Mind of a Master Procrastinator – February, 2016

Each year dozens of thought leaders take the stage in Monterey, CA to share their stories and ideas on the TED Talk stage.

One of our favorite’s this year comes from Tim Urban, creator of the “Wait but Why” blog.

Urban takes you on an insightful and humorous journey to explore an issue many of us struggle with…Procrastination.

He creates mysteries and uses his unique style of humor and story telling to keep the audience engaged while urging them to confront their bad habit and take action while they still have time to get everything done.

Learn how to create desire with irresistible takeaways and emotional hooks and present in a way where your audience won’t be able to resist what you have to say.

but for many the highlight of the Convention came on the first night, from the First Lady.

…including what it’s been like for the last 8 years to raise 2 African American daughters in the White House.

She explained how emotional and motivating it was to her and many women across the United States to see a woman as the Democratic presidential nominee and possibly the first female president in U.S. history.

Watch the video above to see why she stood out among the best and brightest at this summer’s DNC and why she has earned the #3 spot in our Influential Public Speakers list.

See the best presentations from the DNC here.

For us here at Rule the Room Public Speaking, college commencement speeches are our favorite part of graduation season in the spring and winter.

It’s a time when politicians, musicians, actors, business leaders and thought leaders share their inspiration as young people leave school and head out into the “Real World”.

Before an audience of 50,000 at Rutgers University…President Obama gave some practical, some may even say hard-headed advice…”You gotta know what you’re talking about.”

He repeatedly referenced the shift of “anti-intellectualism” in American politics, that he says rejects science, reason and debate.He called on the graduates to take action…

…to hold leaders accountable for what they say and do.

Like many of his speeches, President Obama also incorporated “progressive optimism” into his message saying the best days are ahead for the United States.

The president gave 2 commencement speeches in 2016…

…the other coming at Howard University.

See if you can spot the differences in his messages to the graduates of both schools.

Our Number One presentation comes from Facebook COO Sheryl Sandberg, who delivered an emotional commencement speech at the University of California, Berkeley this spring.

Sandberg’s main message stemmed from the sudden death of her husband in 2015, and spoke about the ways in which adversity can make a person stronger.

“Dave’s death changed me in very profound ways…” she said.

Sandberg also shared with the graduating students that it’s what happens after a major life struggle that ultimately defines a person.

We could only pick 5 speeches to put on the list…

So obviously there were many, many, many other qualified speakers left off this list.

Learn how to create desire with irresistible takeaways and emotional hooks and present in a way where your audience won’t be able to resist what you have to say.